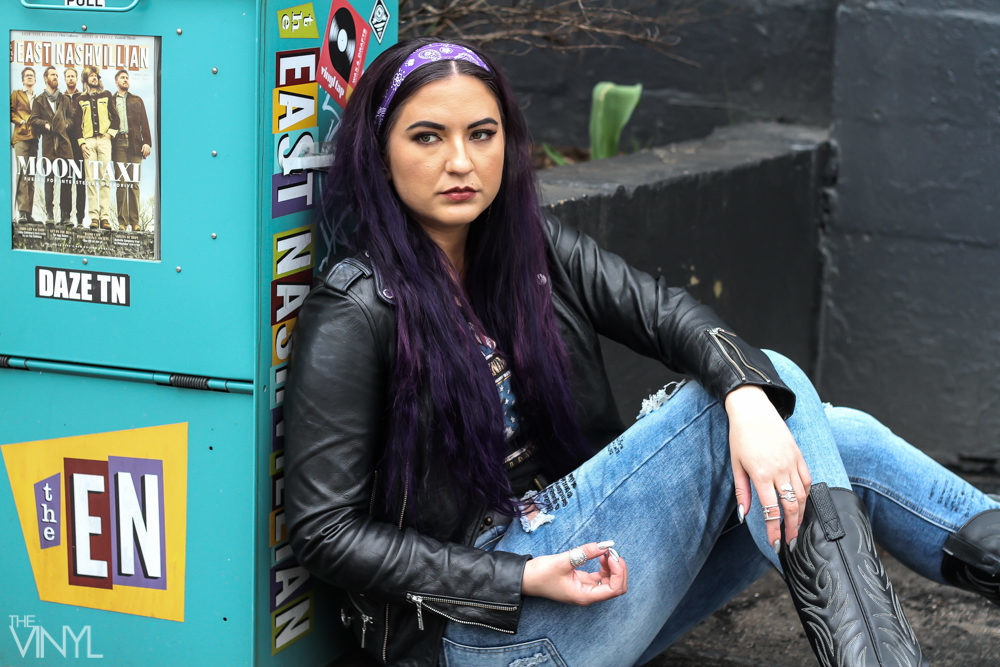 We recently sat down with Nashville songstress Candi Carpenter at one of East Nashville’s spots Vinyl Tap. The purple haired artist talks to us about her music, dream of one day hosting SNL and more.

Can you give us some background on your music? Your inspirations, musical influences? When you first realized you wanted to be in the music industry?
I grew up in Lansing, Michigan, where my father was the pastor of Bethel Alliance Church. Our family had a gospel band called Heaven Sent that toured the midwest, and when I was nine years old, I officially joined. My Grandfather, Ray Burt, was an amazing steel guitar player and probably my first big musical influence. He was the person who introduced me to country music. At age eleven, I crashed a Vince Gill concert by passing a note to Vince on-stage, asking if I could yodel for him. He brought me onstage to sing, and in that moment I knew for sure that I wanted pursue a future in music. Later that year, I signed with my first producer in Nashville, TN.

By the time I was fifteen, I’d dropped out of high school to move to music city. I lived in a rundown hotel room on Lower Broadway, and played every bar and honky tonk up and down the strip until 3 AM. At sixteen, I was touring with Grand Ole Opry Legend, Jack Greene, and performing with icons like Loretta Lynn, Little Jimmy Dickens, and Porter Wagoner. I spent every weekend that we weren’t on the road backstage at The Grand Ole Opry watching and learning from my heroes. I often wonder what if would have been like to have a so called “normal” childhood, but I don’t believe in “normal.” I don’t think it exists.

My sound is a mixture of gospel, soul, traditional country, pop, and rock. Imagine Chris Stapleton, Janis Joplin, Dolly Parton, Patsy Cline, Aretha Franklin, and Tom Petty having a party with a church choir. It gets wild and out of control.

You recently became signed to Sony Music! Congrats! What was the process like and where were you when you got the call? I showcased at the New York office and was signed on the spot! After the meeting, I was so shaken up that I drank three martinis and went straight to bed.

Living in Nashville there is so much musical history here? Are there any places you go for inspiration when writing music? I do my best writing while I’m driving. (Don’t worry ya’ll, I keep my eyes on the road!) If I forget the line by the time I get home, then it wasn’t the right line. Just being in Nashville, and around music row is inspiring. Sometimes songs keep me up all night, and a verse or a melody will start rolling around in my brain just as I’m about to fall asleep. That’s probably why I drink so much coffee.

You have been performing with Song Suffragette & recently hosted! Can you tell us what that experience was like? Being part of Song Suffragettes is one of my favorite things in life! I’m an only child, but these girls have become like sisters. Hosting the show a few weeks ago was the first time in a long time that I’ve been nervous to perform. Kalie Shorr and Lena Stone were both out of town, and I wanted to make them proud. Todd Cassetty and Helena Capps are the masterminds behind this beautiful organization, and I’m so thankful to them for bringing women in music together in such a powerful way.

Your song “Nights and Weekends” recently premiered on Country Fancast! This song is inspired by your father and him not seeing your mother due to a third shift schedule. What is some advice you can give to artists trying to find their place?
“Nights and Weekends” is about my mom and dad, and also my own journey. For a while, I worked three jobs at once so that I could pay bills and pursue music. Never, ever, ever give up. You never know what would have happened the day after you do.

What’s next for you? Will we be getting new music? Music video? Will you be touring soon? I have lots of surprises in the works! Follow me @CandiCarpenter on Twitter, Facebook, and Instagram to stay up to date on what’s happening!

If you could collaborate with any artists past or present, who would it be & why?

I would give anything to sing with Dolly Parton or Chris Stapleton. Dolly is my hero, and Chris’ voice and ability to fill every note with so much emotion knocks me out.

What is some advice you can give to fellow female musicians in the industry?

Don’t let yourself feel competitive toward other female artists. You’ll find your own lane by embracing what’s special and unique about you. It’s hard not to compare yourself to other girls, but try not to! Don’t let what’s wonderful about them make you forget about your own amazing qualities.

What is an unknown fact about you that fans may not know?

My life’s dream is to host SNL. I want to scream, “Live From New York, It’s Saturday Night” more than anything. I grew up on Steve Martin, Chevy Chase, and Martin Short, and I love comedy. I do all of my own stunts, and I’d be happy to fall down or take a pie in the face for laughs. I’m serious. Anybody know Lorne Michaels?

Candi just recently just released a music video for her single “Cry Baby” which was inspired by her first few months living in Nashville at the age of 15.