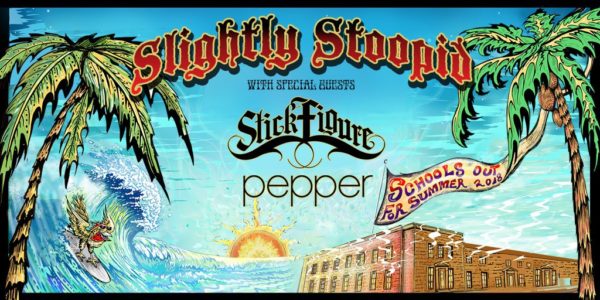 GO LIVE: School’s Out For The Summer with Slightly Stoopid!

Finally a break from the days of torrential downpours we have had, the sun was out hotter than ever and just for Slightly Stoopid, Stick Figure & Pepper. The crowd was already piling in the place by the time the show actually started.

Up first a band from Hawaii, Pepper took the stage first. Not to be biased but Peppers set was amazing, even better than the last time I saw them when the co-headlined with Less Than Jake. For a band that’s first on the bill, the pavilion was pretty full. With only roughly an hour to perform the band made sure to give it their all but not try to hard, just three guys enjoying what they love. The band played 11 songs, in which two of them had a surprise guest while being played. Pepper opened up with Dry Spell, then moved onto The Invite and B.O.O.T. The two songs including the special guests included KBong of Stick Figure who played Rent with the guys and also Miles Doughty of Slightly Stoopid who played his trumpet to Never Ending Summer. Also, Pepper threw out a giant inflatable RAW Blunt into the crowd which honestly was the best thing during their set. Pepper closed their set with Give It Up.

After such an energetic set from the guys in Pepper, Stick Figure took the stage and let’s be honest, Cocoa the Tour Dog stoke the entire show. The sweetest dog, just chilling on stage with good music being played, Cocoa definitely has the life. She also carries around her toys on stage as well which was just so adorable. But back to Stick Figure, I’ve never seen them live before so I wasn’t sure what to expect. However I was definitely digging their set as the time went on. Their energy (especially from their Keyboardist who was all over the place) was jist right but they were also on the mellow side as well. To name off a few songs of theirs played consisted of Shadow, Hawaii Song and Shelter.

Next up was Slightly Stoopid and their intro was quite fitting to the name of their “Schools Out For The Summer Tour 2018, their intro was Alice Coopers School’s Out. What really caught my eye during their set was their amps that had a Star Wars cover on it, I totally geeked out. The night became cooler and the fans grew louder once the band began their set. Being the headliners they obviously had the longer set that included so many hits from their discography, some of those are Hold It Down, Till It Gets Wet, 2AM and If You Want It. But not only did the band play their own songs throughout the night they also covered the late Tom Petty’s You Don’t Know How It Feels. They closed out their set with Castles of Sand. However the night was still young as the band left the stage, the crowd had such a energetic buzz that Slightly Stoopid returned to the stage and gave the Baltimore crowd an encore of three songs. Those songs played during the encore were Zeplike, Closer to the Sun and their final song of the night No Cocaine.