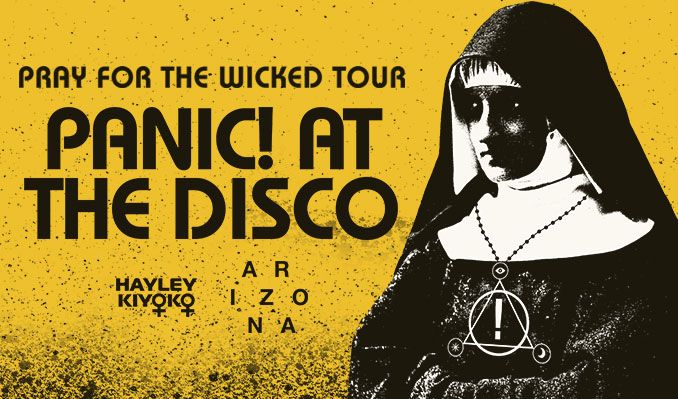 GO LIVE: Panic! At The Disco brings their Pray for the Wicked Tour to Royal Farms Arena!

Here in Maryland we have had nothing but off and on rain storms making it the type of “stay at home and watch movies/lay in bed” type of weather, but not for the fans who sold out Royal Farms Arena to see Brendon Urie kill it with his band Panic! At The Disco.

A giant LED screen backdrop displayed a massive countdown to Nine o’clock pm. With seconds left on the timer the fans grew louder and louder. Once the timer hit 00.00 the band took the stage started the intro to (Fuck A) Silver Lining, as the intro went on Brendon Urie popped out of the middle of the stage and that’s when my ear drums practically burst, the fans went crazy. Most fans surrounding the triangular catwalk/stage were in complete awe as Brendon sang and went back and forth between both sides of the stage.

Currently touring in support of their latest record Pray for the Wicked. The setlist that night was twenty five songs long. Of course Panic played new songs off their latest record such as High Hopes, Hey Look Ma, I Made It, Dying in LA and King of the Clouds. But would it really be a Panic! At the Disco show if they didn’t play This Is a Gospel, The Ballad of Mona Lisa and Nine in the Afternoon? No I don’t think so. Not only did Urie play his own bands new and old materials he also threw in some covers (in which he practically did better then the original artists, in my opinion). Some covers he played during their set were Bonnie Raitts I Can’t Make You Love Me, Cyndi Laupers Girls Just Want to Have Fun and Queen’s notoriously famous Bohemian Rhapsody.

Closing out an amazing setlist of twenty five songs that had everyone in attendance out of their seats and dancing, Urie and his band closes the set with Emperors New Clothes. The band the departed the stage but just when fans thought the night has come to an end, Panic! At the Disco returned for an encore of three songs including Say Amen (Saturday Night), their most famous song to date which is I Write Sins Not Tragedies and last but not least Victorious.