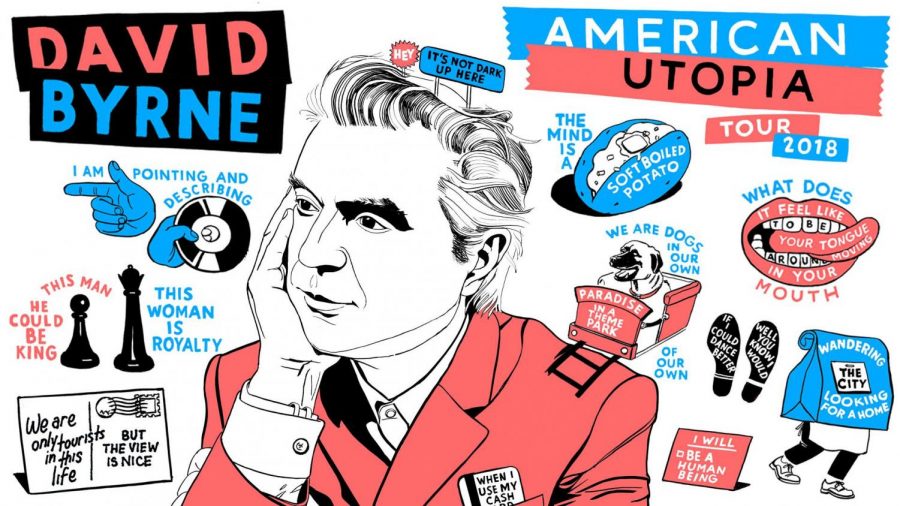 The stage set up and the production was quite simple. For this particular show it was
theatrical yet basic. Which being basic isn’t always a bad thing. Along the perimeter of the sides and back of the stage it was lined with chains in a drapery form, dead center in the middle of the stage was a simple table and chair with a brain located right in the middle. The lights went out and a beam of white light shined bright on the table. Byrne then took the stage opening up with his own song, Here. He caresses the brain and sings to it as he sang, eventually he got up and held it up to the crowd. Then the desk and brain were gone and Byrne was joined by his synchronized back up dancers/band.

Byrne is famously known for his band Talking Heads which had many many hits back in the day. Eighteen songs made up the setlist for the show here at Merriweather Post, and of course Byrne played his own material such as Lazy, Dog’s Mind and Everyday is a Miracle. But as you know, there were a lot of fans in attendance who were there to hear some Talking Heads songs as well. Byrne played more Talking Head songs then his own I believe, some Talking Heads songs that were included in the setlist were I Zimbra, Slippery People, Blind and the most popular single of theirs, Burning Down the House. Not only did Byrne & co play a mixture of Talking Heads and Byrnes original material they also threw in a handful of covers such as Brighton Port Authority’s Toe Jam and lastly during the “second encore” he covered Janelle Monáe’s Hell You Talmbout to close out his set.