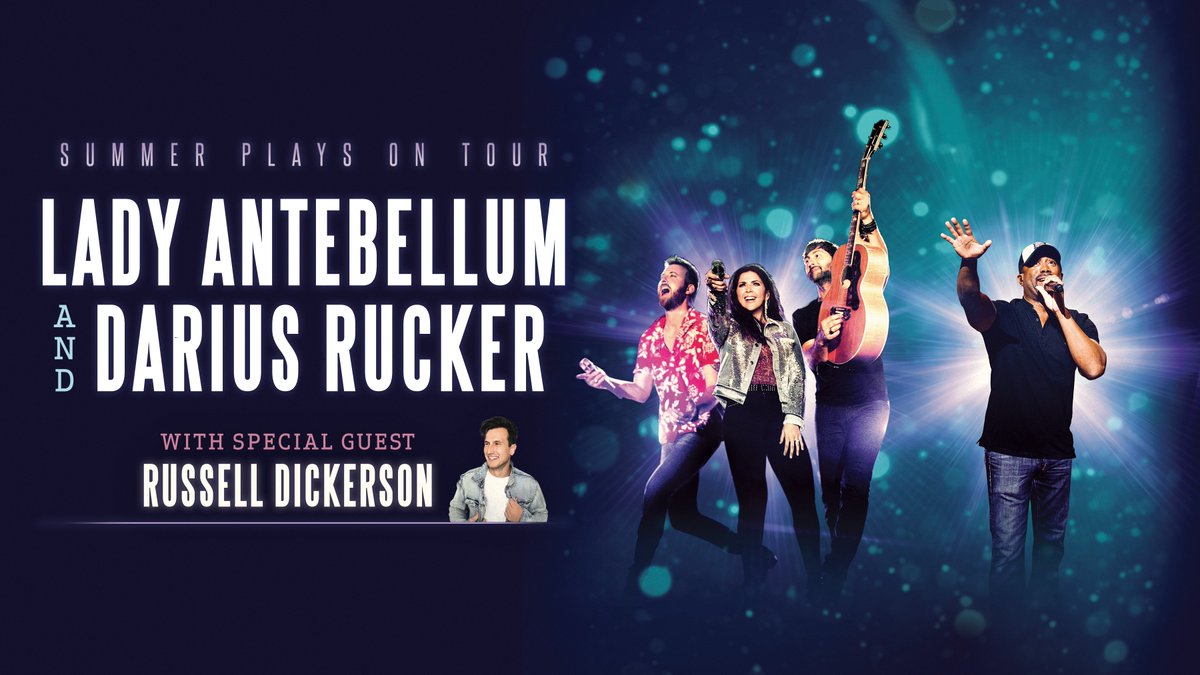 Lady Antebellum and Darius Rucker team up for the summer to bring fans a concert full of hits all throughout the night, they even brought Russell Dickerson along for the ride. Merriweather Post Pavilion was packed. A full lawn, a full pavilion and fans packed like sardines in the GA pit, they were ready for a good time!

Opening up the night Russell Dickerson had a lot of people to swoon, not only with his good looks but with his setlist that night. Now Dickerson is fairly new in the country music world/ music world in general so he had to prove he has what it takes to open up for country musics power trio, Lady A and Darius Rucker. With a eight song setlist and not a lot of time on stage i think it’s safe to say he did a great job with the crowd. For his set he played his original material such as twentysomething, Billion$ and Blue Tacoma. He also covered the late Whitney Houston’s I Wanna Dance With Somebody. He ended his set with Yours.

Next was Darius Rucker he opened up with Homegrown Honey. I’ve never seen Rucker live before so I was so sure what to expect. But from what I’ve heard he puts on a fantastic show; and yes he met expectations. Some people may know him from his past musical endeavors, Hootie & The Blowfish, he still played a few songs from his past including Let Her Cry and Only Wanna Be With You which got everyone off their feet and singing at the top of their lungs. He also played a good handful of his originals such as Don’t Think I Don’t Think About It, Alright and Comeback Song. Not only did he include Hootie covers he also covered Drivin’ N Cryin’s Straight To Hell. Fans from the time Rucker went on stage to the time he ended his set with Wagon Wheel, fans were up dancing and singing along all night.

After Darius Rucker leaving fans with such a buzz (or that might be all the beer and liquor I saw being consumed, nah it was Rucker’s set) Lady Antebellum took the stage with full force! Opening up the night with You Look Good fans were already up dancing and singing away. Being the headliner you must keep that high energy up; Lady Antebellum did NOT disappoint at all. The trio has been making hit after hit even after their little break a few years ago. Their setlist was fourteen songs long plus the three song encore at the end. What was played that night included I Run To You, Dancin Away With My Heart, Lookin for a Good Time and even a cover/medley of their own song Heart Break and a cover of Dua Lipas New Rules. The band also performed covers such as Diamond Rio’s Meet Me in the Middle mixed with their own Compass, they also covered Keith Urbans Raining on Sunday. The band closed out the night with We Owned the Night (literally) and moved onto their encore where they covered Hootie & The Blowfish’s Hold My Hand and Deana Carter’s Strawberry Wine. They officially closed out with Love Don’t Live Here Anymore.