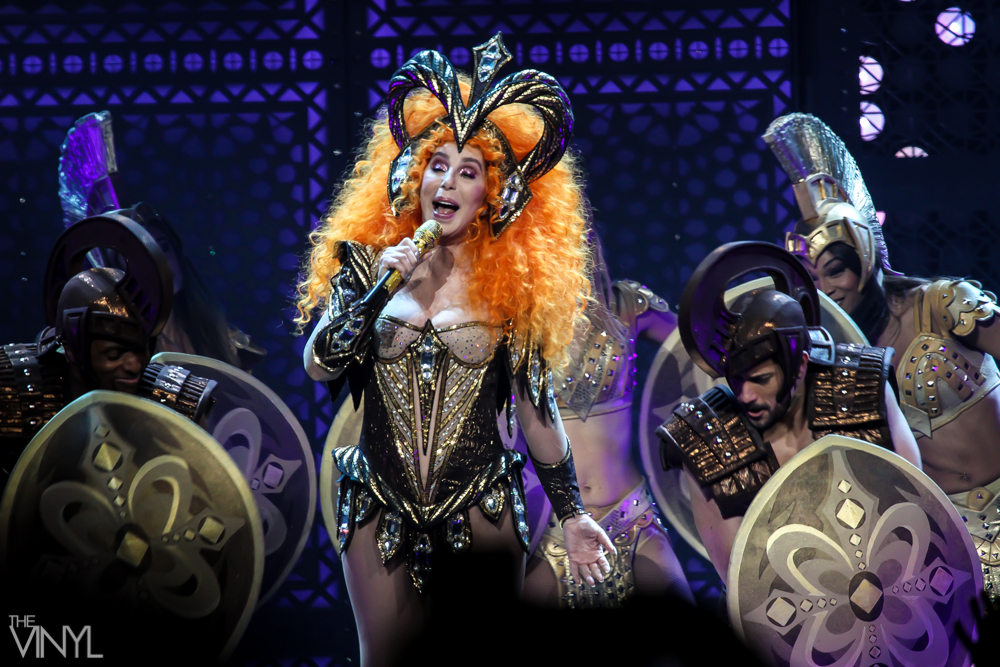 Last night global icon Cher brought her Here We Go Again Tour to Bridgestone Arena in the heart of Nashville. Cher is currently touring the states in support of her recent release Here We Go again which features all ABBA covers.

Fans of all ages braved the below freezing temperatures and made their way into the venue. Fans were adorned in their favorite iconic Cher looks , vintage Cher shirts and bell bottoms. Disco was in full effect! Joining Cher on the road was Nile Rodgers and Chic. The band played several of Chic’s hits including Dance, Dance, Dance, I Want Your Love and Le Freak. Nile and Chic had the entire venue up on their feet the entire set!

Next up was Cher, fans began to stand as the venue lights dimmed and an video montage began playing on the giant curtain that hung from the stage. The video featured some of Cher’s iconic looks as her hit Woman’s World began to play. The curtain dropped and Cher began to descend from the ceiling in a gold sequin dress complete with headdress. We cannot think of an more iconic entrance!

Cher had multiple outfit changes throughout the night which included glitter bell bottoms, traditional indian robes, her iconic Turn Back Time glitter suit and leather jacket just to name a few of the looks from the evening. Cher recently made an appearance in Mamma Mia: Here We Go Again. The grammy winner performed several songs including Fernando in which she duets with Andy Garcia in the film. She also performed Waterloo and SOS in which the entire venue turned into a full on ABBA musical!

As the evening went on not a single person in attendance was seated! Fans were singing along word for word to every song performed. Cher played several hits including I Got You Babe, The Beat Goes On, Almost Enough, Welcome to Burlesque, Walking in Memphis (Marc Cohen Cover), The Shoop Shoop Song (Betty Everett Cover) and closing out the show her hit Believe. In true Cher fashion the singer came out in a diamond dress with red pasties! Cher has been entertaining crowds since 1963 and fans both new and old continue to be wow’d this Grammy award winning legend.

Check out Cher’s video for SOS