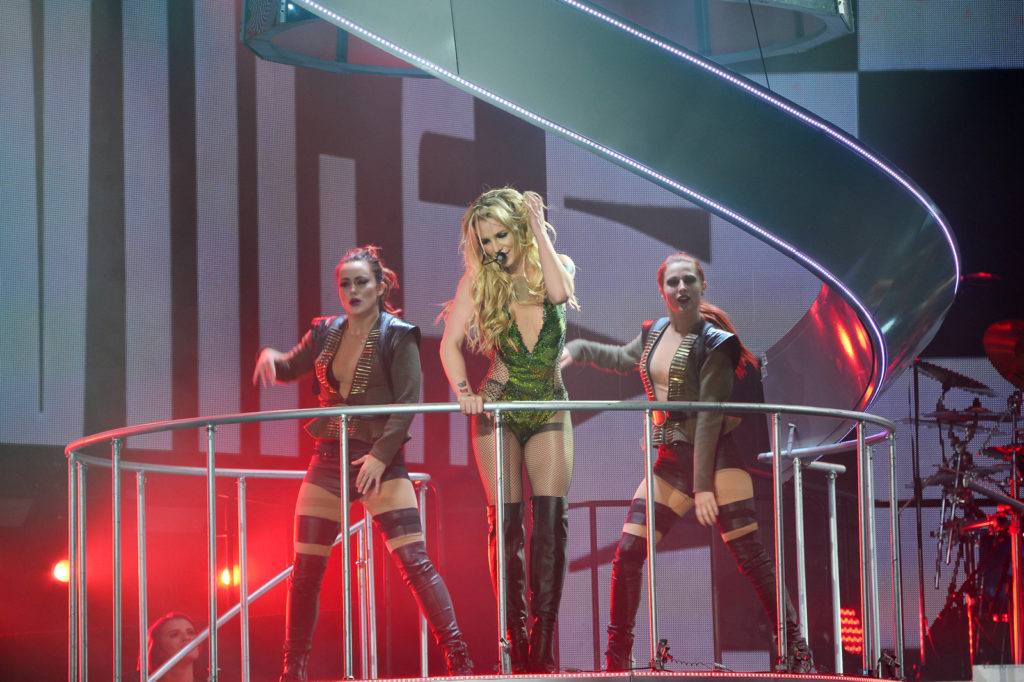 Grammy Award-winning international pop superstar Britney Spears returned to Las Vegas, Nevada for her final run of summer shows on her iconic and extremely successful residency, ‘Britney: Piece of Me’. The AXIS at Planet Hollywood Resort & Casino has been the home of Spears’ residency since December 2013. Since that time, Spears has performed for over 700,000 fans and attendees, making the show one of the best-selling and most successful productions on The Strip. Spears took a break from Sin City back in May to bring the production overseas for the first time before returning it to its original home this month.

Spears kicked off the show with “Work Bitch,” from her 2013 release Britney Jean. As the lights went down, the pop phenomenon’s dancers clad as soldiers lined along both sides of the stage. A “smoke and mirrors” illusion for the introduction, Spears appeared all smiles, sporting a green bejeweled bodysuit in front of a lit-up geometrically designed mirror before making her way center stage. She proceeded into “Womanizer,” which included props such as light-up batons and an electric breakdown during the bridge. (I have to note that the added breakdown is one of my favorite parts of the show, along with the choreography.) “How you feelin’, Vegas?!” Spears bantered, as part of her limited commentary. “Are you guys ready to break the ice?” she punned before jumping into “Break the Ice.”

Amid Spears’ 8 and her dancers’ several costume changes, she managed to perform 26 of her biggest hits, including latest singles “Make Me…” and “Slumber Party,” with non-stop energy in under 100 minutes. It is not surprising that the show itself seems to go rather quickly, since attendees are constantly immersed in the complex production of pyrotechnics, acrobatics, projections, and lasers. Key moments during the show included performances of “Toxic” and “Do You Wanna Come Over?” which truly showcased how much Spears was enjoying herself on stage. It is no secret that she has never taken herself too seriously, and being able to see such a lighthearted relationship between she and her dancers was beyond refreshing. Spears’ choreography truly shone during “Me Against the Music,” where she donned a sheer, laced black bodysuit and long, messy blonde locks. The set design featured a wooden prop that resembled the maze shown throughout the music video for the In the Zone single. It, paired with the original choreography from back in the day, was the perfect taste of nostalgia for diehard fans.

The “Gimme More” songstress has been known to be the topic of controversy in previous years due to her sex appeal. Despite her toning that down since becoming a mother to her two boys Jayden and Preston, she brought all of that and more to the table during iconic hits such as “I’m a Slave 4 U,” “Breathe On Me,” and of course “Freakshow,” where she brings up a lucky male fan to be her “boy toy,” whipping him down the catwalk alongside her dancers. If there’s any bucket list item to have, I would be surprised if that wasn’t on it—for anyone. It’s understandable for any performer’s energy to diminish after an hour and a half of dancing, and the exhaustion on Spears’ face was quite apparent by “Stronger,” despite her perseverance to continue on through the encore. “You guys want one more?” Spears teased, as she closed out the show with 2011 Femme Fatale smash “Till the World Ends” in an electric red bodysuit and boots. As poker chip-designed confetti fell from the ceiling, Spears and her dancers thanked the crowd as they made their way to the end of the catwalk. It is quite remarkable to think that the pop star has been on this stage for almost four years now, but her energy and charismatic stage presence nearly convinced you this was night one of the spectacle. Living legend, you can look—but don’t touch.

Update: This may have been one of Spears’ final non-live shows for ‘Piece of Me,’ as the pop princess surprised and shocked fans, critics, and people around the globe with a completely 100% live cover of Bonnie Raitt’s 1991 classic, “Something to Talk About” on August 19, 2017. Only time will tell if this was a one-off moment, but if this is any indication for the direction Spears is heading next, it could be a massive turning point in her career. We can only hope we hear more of these legendary vocals in the future, especially following ‘Piece of Me’! Read Spears’ full speech below:

“How you feelin’, Vegas?! No, really—how you feelin’? Honestly, without the music and just the mic, it kind of feels illegal. Like, it’s quiet right now! It feels kind of illegal doing this, with this mic in my hand right now. It feels so weird. Okay, so, I’ve been doing a lot of thinkin’ lately, right? Okay, this morning, I woke up and I was like, looked in the mirror, there’s a lot of things going on in the world and stuff. But basically, I looked and was like, you know what? The press and the media—my whole life. It’s really crazy, ’cause one minute, they tear you down—and they’re just really horrible—and the next minute, you’re on top of the world, you know? But, I’ve never really—I’ve never really spoke about it, you know? And, I’m a Southern girl—I’m from Louisiana. I’m from the South and I like to keep it real, so I just wanna make sure I keep having [giving] you motherf—ers something to talk about, okay?”

A true entertainer in every sense of the word, Spears’ run with Planet Hollywood and Caesars Entertainment will only contribute to her already incredible legacy. Time is running out to catch the pop icon in all her glory, so purchase your tickets now! Spears’ residency, ‘Britney: Piece of Me’, goes through December 31, 2017, with final shows kicking off September 3, 2017. Tickets, along with VIP packages and meet and greets can be purchased via Ticketmaster here. Spears’ latest album, Glory, is available now.

Heading to the show? Be sure to tag all of your photos/tweets with #PieceOfMe, for a chance to be featured on the big screen inside the venue!

Review by Curtis Vadnais for The Vinyl/Caesars Entertainment.