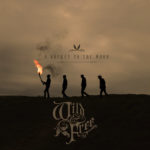 It’s been 4 years since A Rocket To The Moon released On Your Side, Fans have waited with baited breathe for the release of their sophomore album Wild & Free. The guys of A Rocket To The Moon have sure grown since their last release and it shows! The album has great musicality from beginning to end, with  a little country-rock feel. With Nick Santino on vocals, Eric Halvorsen on bass, Justin Richards on guitar and Andrew Cook on drums it is a great mix. Each member adds their own piece to the group and each have their individuality.Several tracks that stand out to us on the album are “If I’m Gonna Fall In Love”, “Another Set Of Wings”, “Nothing At All” , “Going Out” and “Wild & Free”.  We are beyond proud of the hard work these guys have put in to put out such a great album! In support of the album the band will be heading out with The Maine, This Century & Brighten this summer on the 8123 Summer Tour  ! Don’t Miss out on seeing these guys on the road!

Pick up Wild & Free on iTunes