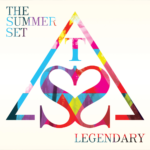 The Summer Set has done it again folks! With a more pop feel to the new record Legendary , its the kind of record that makes you want to just get up and dance. This will be the bands third full length album, and it really shows their musicality. Whether you are just finding out about The Summer Set or have been their since their first EP you will love this record! With Brian Logan Dales on Vocals, Jess Bowen on Drums, Stephen Gomez on Bass, John Gomez and Josh Montgomery on Guitar the band is made of a great group of characters! Each member brings  their own to the band and it’s what makes The Summer Set such a great and talented band. Several tracks that stand out to us on Legendary are “Boomerang”, “Maybe Tonight”, “Heart On The Floor” Ft. Dia Frampton and “Lightening In A Bottle”.  The Summer Set is quickly becoming a must hear breakout artist of 2013 and we couldn’t agree more!  The album will release on April 16th on iTunes,The band will set sail on Vans Warped Tour in support of the album.

Check out the tour dates  and Pre-Order Legendary