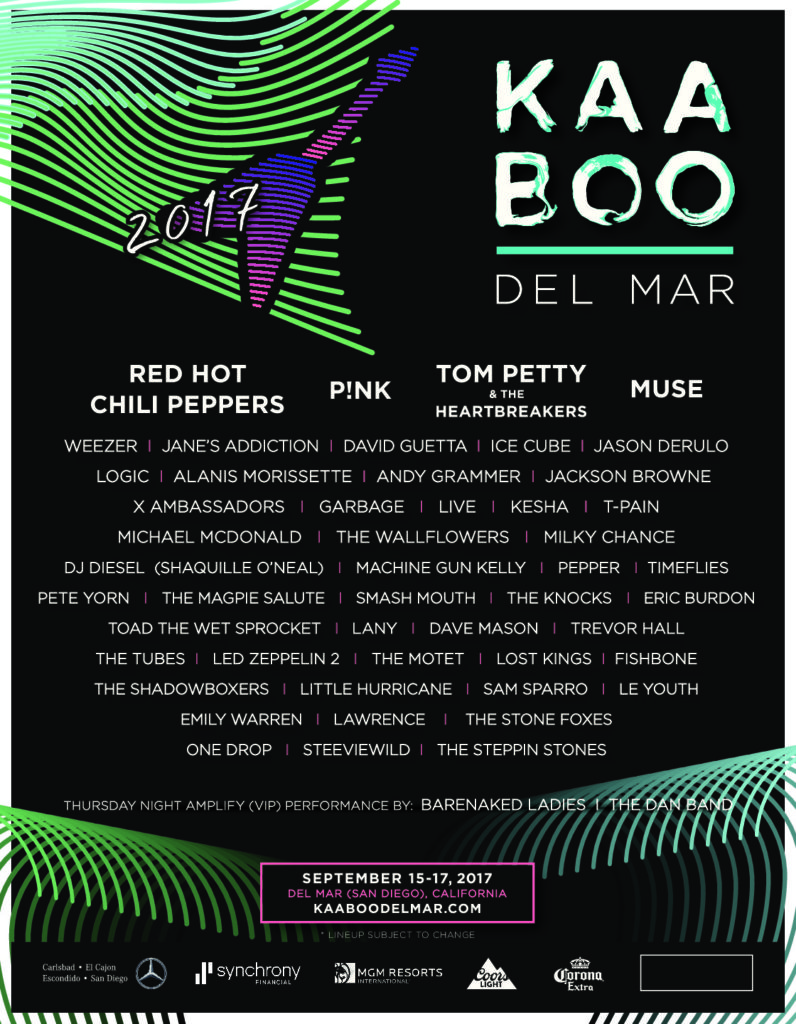 KAABOO Del Mar returns for its third year to the famous Del Mar Racetrack and Fairgrounds just outside of San Diego, California in just a few weeks! The festival will run from September 15 through September 17, 2017. Topping the phenomenal bill of artists this year are some of the biggest names in music including iconic rock n’ roll legends Red Hot Chili Peppers, Tom Petty & the Heartbreakers, fiery pop performer P!nk, and alternative English rock trio Muse.

Other artists set to make their appearance throughout the weekend include Weezer, David Guetta, Ice Cube, Jason Derulo, Kesha, and many, many more! Check out the full lineup over at www.kaaboodelmar.com.

KAABOO is one of the biggest events of the year taking place in Del Mar, California. Despite it being only its third year as a one-of-a-kind live entertainment experience, boasting one of the strongest music lineups to date, it’s become one of the biggest contenders for festivals in California. It is described as much more than your standard “music festival,” but rather a “mix-perience.” In addition to the crafted legendary lineup of music, several of other aspects of the festival are what drawn in thousands of attendees, including the delectable food, influential art pieces, and fantastic culture. As stated, per the official website: KAABOO was created by music lovers for music lovers. An adult escape, uniquely curated to appeal to all five of your senses, with world-class music, hilarious comedy, incredible cuisine, craft libations, inspiring contemporary art, and personal indulgences.

KAABOO Del Mar “Hang Loose” three-day general admission passes start at $299, with VIP “Hang Five” passes starting at $899. VIP “Hang Ten” passes are SOLD OUT and limited quantities remain for 2-day and 3-day, so what are you waiting for!? Get your passes now at www.kaaboodelmar.com!

We can’t wait to see what’s in store for this year’s festivities! Be sure to check back for our exclusive coverage following the event, as well as on our Instagram (@thevinyl), Snapchat (@TheVinylRecord) and Twitter (@TheVinylRecord).

Missed the festival last year? Check out everything that went down in our recap and photo gallery here!