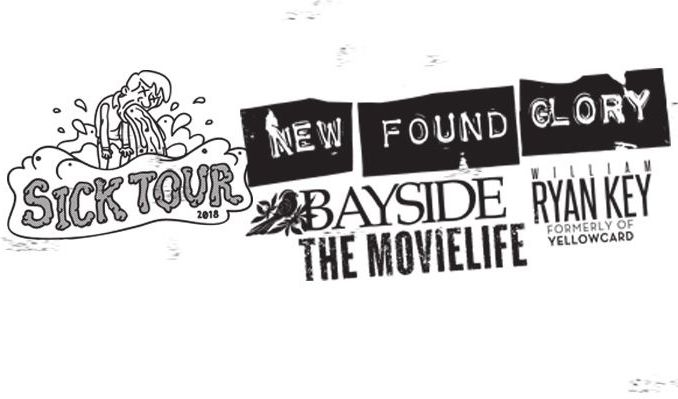 Currently on the Sick Tour, New Found Glory brings Bayside, The Movielife and William Ryan Key to The Fillmore along for the ride. Then with an unexpected thunderstorm rolling through Silver Spring, it didn’t stop fans from showing up early to the nearly sold out New Found Glory show!

Up first was William Ryan Key, you may know him as the former lead vocalist for Yellowcard. Just recently Key released his debut solo record, Thirteen, on May 25th and this date of the tour was before the release date he made sure to play every song off that EP for the fans which included Vultures, Thirty Days & Old Friends. Key also told fans a story about why he decided to go by his birth name for his new journey and it was quite touching, then he proceeded to play his set. And of course he addressed the elephant in the room and gave the fans a Yellowcard song, Ocean Avenue. After a fantastic mellow set from William Ryan Key, The Movielife took the stage and really gave a energetic set as they played a nine song setlist including Walking on Glass, Hand Grenade and Jamestown.

After two great opening bands, a band I’ve been waiting what seems like forever to see Bayside took the stage. This is my first time seeing them and I was definitely satisfied with their set. Even though they’re pretty mellow-ish the band still absolutely killed it. Bayside opened up theirs set with Already Gone and continued with ten more songs which is a pretty good set for a support band. To name off a few songs that the band played during the night included Sick, Sick, Sick; Stuttering and they ended their set with Devotion & Desire.

After an absolute killer set by Bayside, it was time for New Found Glory to slay the stage. The stage was so bright and their backdrop was so colorful and meant for black light as it popped out in color. The band took the stage full force opening up with All Down Hill From Here! I was expecting all the crowd surfers to start piling up but that didn’t happen until a bit more into the set which I was glad. I’ve seen this band a handful of times and I’m 99.9% they get better each time. The fans got a total of twenty songs including a two song encore. The setlist contained some new and some old material from their discography, new being; Call Me Anti-Social, Party on Apocalypse and Barbed Wire. Some older material included Selfless, Anthem for the Unwanted and Hit or Miss as the ending song before the encore. In the middle of the set, Chad Gilbert & Jordan Pundik brought up a fan to spin “The Wheel of Songs” to pick the next one in the set, the song the arrow landed on was 3rd & Long.

Ending their set with Hit or Miss, the band left the stage with nothing but smiles and sweat pouring off their bodies. The crowd chanted New Found Glory repeatedly; the band then came back out and played a cover of Survivor’s Eye of the Tiger and officially closed out the night with confetti and the bands most popular song My Friends Over You. Needless to say this band is one of my absolute favorites and they absolutely killed their set. One of the best New Found Glory shows I’ve seen to date.