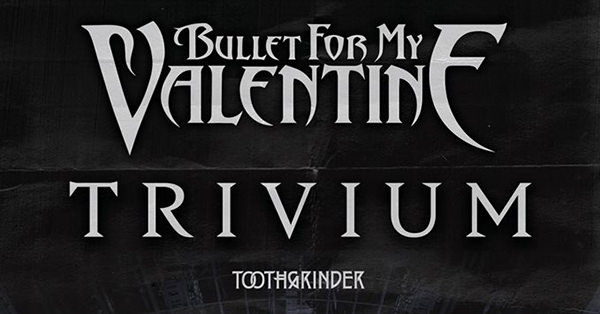 Bullet for My Valentine is about a little over a month out from releasing their newest record, Gravity (Due June 29th). Even though the record isn’t out yet the band still booked a tour with a slew of head banging songs and a  pretty stacked lineup which includes Toothgrinder and Trivium. The floor and balcony was jam packed for a rock show.

Up first was Toothgrinder and they started their set with vocalist, Justin Matthews, in a nice suit diving into the crowd. The lights were dull for this band but that didn’t stop the band from performing their hearts out to the crowd. With a short setlist the band managed to play their tunes such as The Shadow, Let it Ride and ending with Blue. After Toothgrinder Trivium took the stage next and the energy from this band instantly filled the room. Opening up their set with The Sin and the Sentence the crowd knew right away they were in for a good set, almost as good as the headliners themselves. Only seven more songs to go, the band played Betrayer, The Heart from Your Hate and ended their set with In Waves.

Quick intermission as the crew got the stage set up and sound checked the microphones and instruments, roughly around 9:20-9:30 Bullet For My Valentine took the stage opening their set with Don’t Need You. The production of this show was very well planned even though it was a bit plain for most rock shows. But that doesn’t matter at all, the band absolutely killed it. There were nothing but smiles coming from the guys. Thirteen straight songs the band was full of energy and the crowd gave feedback song after song. To name off a few from the setlist are Worthless, Venom, Piece of Me and the guys closed the night out with Walking the Demon.