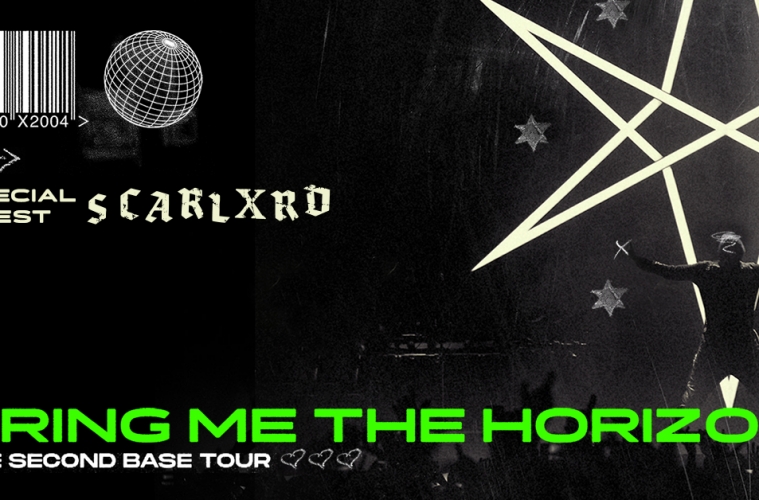 Go Live: Bring Me The Horizon, The Second Base Tour in BALTIMORE MD!

Bring Me The Horizon brings The Second Base Tour to MECU Pavilion in Baltimore, MD and I must say the leg two portion of their excursion of the US was by far better production wise then the tour back in the winter.

Last time I got to see BMTH their stage was almost twice my height and I couldn’t see any other band member but lead vocalist Oli Sykes. However this time the stage was at the perfect height, the stage had really cool features to it that featured a stairway down the middle to some sort of riser and all band members were visible. Not to mention the lighting job was phenomenal.

As Bring Me the Horizon took the stage, they opened with an intro of Welcome to MANTRA, and then proceeded right into the actual song MANTRA. The band had a pretty solid set list that consisted of fourteen songs plus a two song encore. Hit after hit, the band played songs such as Medicine, Wonderful Life, Mother Tongue and Nihilist Blues which are from the band’s latest record AMO; they also played a few hits from previous records such as The House of Wolves, Happy Song, Diamonds Aren’t Forever, Follow You and Drown.

Maryland has been having some pretty crappy weather the past few days, involving rain that is and Even in the torrential down pour the fans went crazy and enjoyed every moment of the show. Honestly this was one of the best BMTH show I have ever attended in my own personal opinion. As the night came to an end, the band ended their fourteen song set list with Drown before proceeding with their encore where they played Can You Feel My Heart and Throne.

bring me the horizon 2