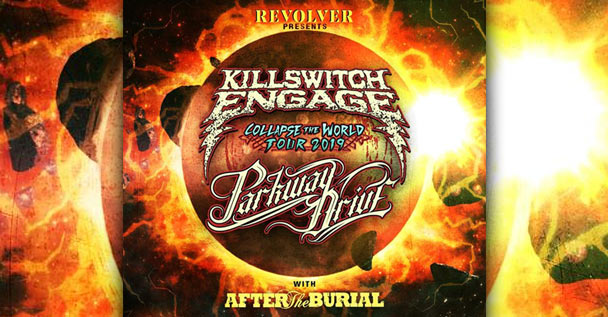 Parkway Drive and Killswitch Engage have teamed up for one massive tour across the states and honestly, what a solid tour combo.

Parkway Drive took the stage first. Last time I got to see Parkway the crowd was insane and security could hardly keep up with the amount of crowd surfers that were heading their way, but this time it was a bit calmer but their set was even greater. Parkway Drive opened up with Wishing Wells. Parkway Drive hailing from Australia has been one of the greatest rock bands I have seen besides a few others of course. With a whole ton of previous records under their belts I’m assuming the setlist process is hard to make up. At the Fillmore Parkway Drive got to play thirteen songs that consisted of Prey, Vice Grip, The Void, Crushed and they ended their set with one of their most popular songs Bottom Feeder and lets just say you definitely felt the ground moving a bit, the crowd got the rowdiest I’ve ever seen. To be quite honest, Killswitch Engage is a fantastic band, but Parkway DEFINITELY brought a lot of energy to the table that night.

After a killer set from Parkway Drive it was time for Killswitch Engage to bring the heat. It will be hard to compete with Parkway Drive after their set. KIllswitch Engage took the stage opening with This Fire. The fans got into it real quick. With a bit longer set, the band had sixteen songs to get the fans as rowdy as possible with. Which they did come close but not AS rowdy and hyped as Parkway did (BUT they still absolutely KILLED IT). Within those sixteen songs Killswitch gave fans a hyped list. Songs played included Take This Oath, No End in Sight, Vide Infra, Always, In Due Time and Strength of the Mind. As the night came to an end, Killswitch Engage closed their set with a cover of Dio’s Holy Diver.

Lets just say this tour was one of the best and most solid tours to start off the summer. Killswitch & Parkway PLEASE tour again together soon! Such a rad tour with an amazing production and some good music!