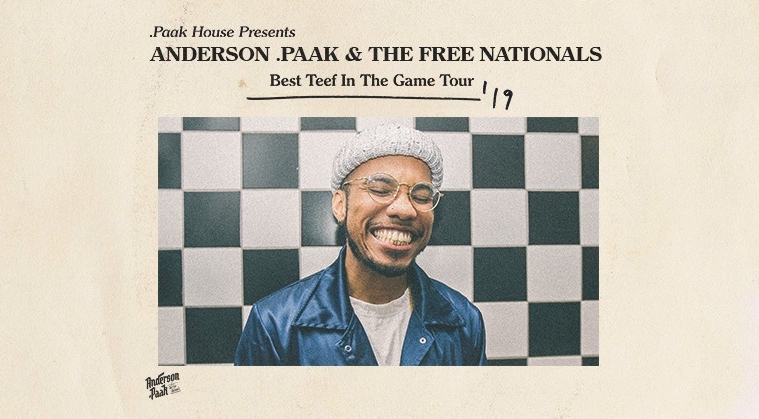 The last time Anderson .Paak was in the DMV it was snowing like crazy and I unfortunately couldn’t even get out of my house to see the show. BUT this time I finally got to attend a show of his and boy let me tell ya! It was a hot one!

To get the mood and energy set, tour support Earl Sweatshirt and Thunder Cat. The performances put on by these two guys were somewhat opposite and both put on a very good vibe. Not to give more attention to one artist but if you get a chance to see Thunder Cat, DO IT. Do not sleep on this guy! He is insanely talented.

After two phenomenal sets, it was time for Anderson .Paak to take the stage. The lights went out and a band member came out playing (I think the trumpet?). Then after a short musical intro, the middle part of the stage lit up and drums started to play. Then rose Anderson .Paak playing the drums as he opened up with Heart Don’t Stand a Chance. Once the song ended the drum kit went back down and Anderson .Paak came down off the riser and continued with his set. The fans went absolutely crazy over him, as they sang along word for word and danced the whole night.

Anderson .Paak played a pretty solid set list in my opinion. He had a total of nineteen songs on his set list, not including the encore. A few songs that built up his setlist included King James, 6 Summers, Smile, Make it Better, Bubblin’ and he ended the nineteen songs with Milk N’ Honey. Not only did he perform his own songs there were also a good handful of cover songs he threw in the mix as well. A few covers thrown in included Kaytranada’s Glowed Up, The Free Nationals’ Beauty & Essex and NXWorries’s Suede. After the last few songs Anderson .Paak and his band departed from the stage only to come back out and give the fans a few more songs. To end the night Anderson .Paak and crew played Come Home, Am I Wrong and Lite Weight during their encore.