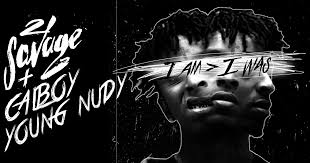 GO LIVE: 21 Savage brings the I Am > I Was tour to The Anthem in Washington D.C.

The fans were lined up a few hours before doors, trying to race to get front row to see 21 Savage. Fast forward to roughly around nine thirty pm, the lights go out and the stage crew pull the black sheet off massive led steps that led up to a mountain like set up. A video montage of 21 Savages past displayed on the LED screen. To be quiet honest the songs went fast and I sure wish it was longer. 21 Savage’s setlist consisted of so many hits whether it was his own from many of his records or songs he has been featured on. Some of his own songs he included in “set one”  were Red Opps, A&T as well as some cover songs were he was featured which include Post Malone’s Rockstar, Migos’ BBO (Bad Bitches Only), Cardi B’s Vartier Cardi and a handful of 21 Savages and Metro Boomins songs.

As the setlist continued, set “two” consisted of many songs off of 21 Savage’s latest record, I Am > I Was. Those songs included Monster, Pad Lock, Break Da Law, Out for the Night and he ended his set with Bank Account.