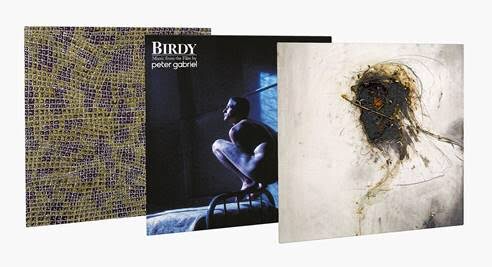 Peter Gabriel, most famously known for his time as lead singer and flautist of the band Genesis, has had a successful career making music for some famous movies. Recently released on vinyl are his work on the soundtracks for Birdy, Rabbit Proof Fence and The Last Temptation of Christ.

Each record comes with unique packaging showcasing some nice artwork created for this release as well as numbering for all those collectors out there!

Birdy, released in 1984, showcases the relationship between Birdy (Matthew Mondine) and Al (Nicholas Cage). Recently home from the Vietnam War, Birdy struggles with some physiological differences that make him believe he is a bird, and Al is there to try and help him through this tough time. The soundtrack for this movie features subdued dark tones that match the struggles of the characters which Gabriel creates using synth sounds with some low bass notes.

Also released was the soundtrack to Rabbit Proof Fence, which debuted in 2002. The cast which stars Kenneth Branagh tells the story of three aboriginal girls trying to make their way back home after being sold into domestic servitude in 1931 in Australia. The 1,500 mike journey is an incredible story with great visuals to match. Gabriel creates another wonderful soundtrack utilizing more synth sounds, however this time matching the grand scale of this movie. He really creates a tense tone to his work on this film which goes with with the drama the girls face on their trek home. For lack of a better term, there are some almost whale like tones throne into his work that pair well with the Australian wilderness of the film. The tones give the music life to match the rustic setting of the movie.

The final record released is the soundtrack to The Last Temptation of Christ, released in 1988. Delivered by an all star cast including Willem Dafoe as Christ, Harvey Keitel as Judas and the late David Bowie as Pontius Pilate, the film recreates Christ’s last days as he struggles to combat the Romans and spread his good word as the son of God. Gabriel creates a unique soundtrack for this film paring his 80s synth sounds with some Middle East notes such as pipes. This creates a nice mystical sound, adding to the old world setting of this film.

Peter Gabriel has created three different soundtracks that show off his musical range and talents. The vinyl releases are sure to be collectors items going to cinema buffs this holiday season.