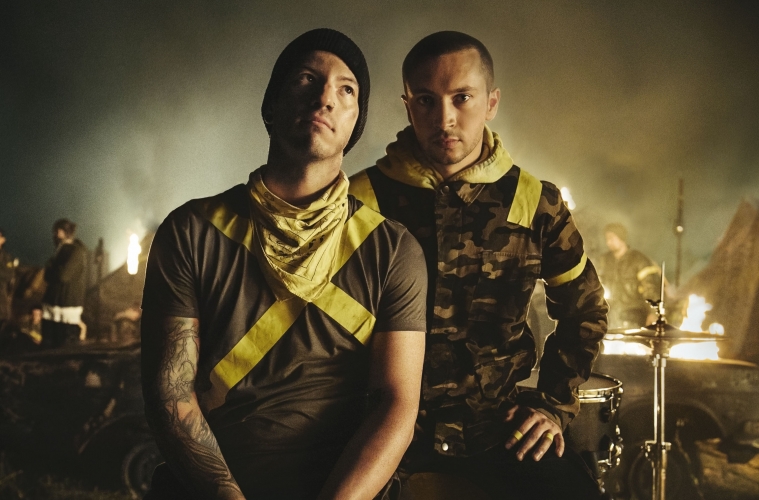 Last November we had the pleasure of catching TOP on the first leg of their Bandito Tour. Currently here on leg two and with a slightly different production then last time we are out here covering it again and to be quite honest I love this band more each time. They’re THAT great live.

The arena was full top to bottom, left to right. A sea of fans decked out in their “Clique” apparel started to chant TOP. Then the lights went out, some were in tears and the whole arena roared. Ear piercing. The curtain dropped. Josh Dun and Tyler Joseph appear on top of a vehicle, Dun holding a torch made his way to the edge of the stage and the fans went absolutely crazy.

The guys opened up with Jumpsuit then directly into Levitate. (Please note they played my absolute favorite song while I got to photograph; Heavydirtysoul). All on the mainstage the band played a few more such as House of Gold, Lane Boy, Stressed Out and then Nick and the Niners. After Nico, Tyler walked through the crowd to the B Stage where they performed Smithereens, Migriane (in partial) Tear in My Heart and Bandito. They also played Pet Cheetah but finished it back on the mainstage.

Midway through the set and back on the mainstage, they continued their twenty one song setlist with Holding on to You, Morph, Ride  and then also brought out support act Misterwives to perform Cut My Lip. Twenty One Piliots then ended their set with Car Radio.

Just when you think the night was ending, it wasn’t.  Two more songs were gifted to the Clique (That is what their fan base is called just an FYI). The songs that made it to the encore was Chlorine and Trees.

Yet again, not being biased but Twenty One Pilots pulled out all the stops yet again. If this tour comes to a city near you DEFINITELY pick up some tickets because this production was INSANE!