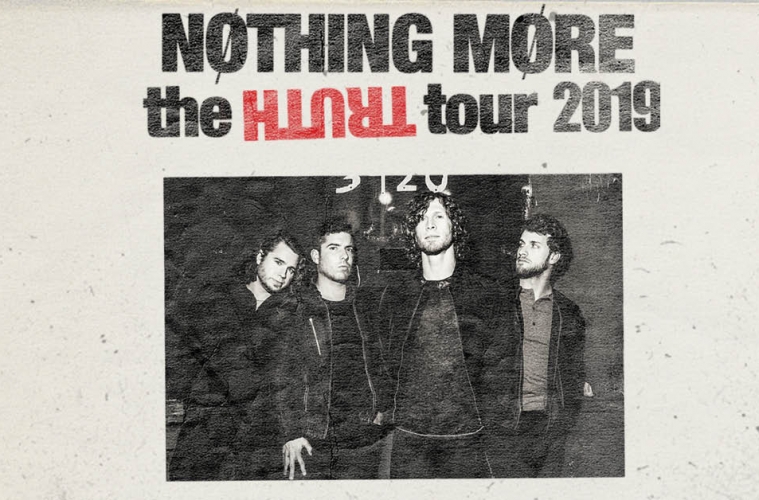 Go Live: Nothing More celebrate FINALLY selling out the Fillmore in Silver Spring!

Nothing More has been in the area a handful of times and tonight on March 13th 2019 they FINALLY sold out the Fillmore in Silver Spring MD. Front man Jonny Hawkins proudly announced that they got to finally have a brick colored in with their name on it, which is located backstage. The Fillmore in Silver Spring honors artists who sell out their venue by giving them a special colored in brick, in my opinion I think that is pretty rad of the venue to do so.

Nothing More brought the Truth Tour to the Fillmore along with special guests Of Mice & Men, Bad Flower and Palisades. We unfortunately didn’t get to catch Bad Flower or Palisades but we did manage to get some content from Of Mice & Men and Nothing More.

After two sets from the energetic openers, Of Mice & Men took the stage. This band has been in the industry for quite some time now and even with role changes etc they still managed to give one of the best sets I’ve seen from them in a while, or at least from the last few times I got to see them. The band played a variety of music from their lengthy discography. Their set consisted of Warzone, Would You Still Be There, O.G. LOKO and You Make Me Sick.

The crowd was rowdy after Of Mice & Men and the energy kept up throughout the night as Nothing More took the stage. This was the third time I have seen this band and every single time they do not disappoint one bit. From the production to the music itself is all just insane.

Nothing More opened the show behind a massive white curtain as front man Jonny Hawkins was on this tall drum kit noise maker (Sorry I have no idea what they call it), the introduction song of the night was Let ‘em Burn. Nothing More played a pretty solid set in my opinion. The setlist was sixteen songs long. They played Don’t Stop, Mr. MTV, Jenny, Go to War and Fade In/Fade Out. The band even played a cover of Skrillex’s The First Equinox right before they ended the night with one of their most popular hits, Salem (Burn the Witch). If you have a chance to catch Nothing More headlining with Of Mice & Men, Bad Flower and Palisades this is one tour you most definitely do not want to miss!