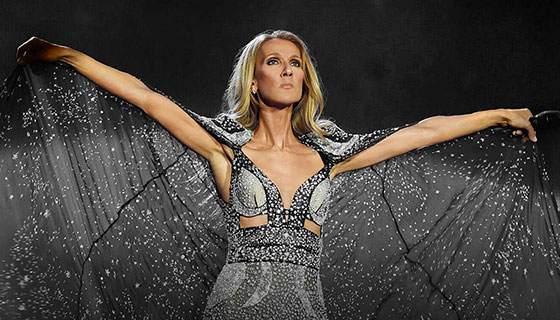 When I found out that I was going to cover the Céline Dion “Courage” tour, my mind immediately went to Titanic’s “My Heart Will Go On”…naturally.  But I also thought about my senior year of high school since our senior prom chose “The Power of Love” as our theme song.

Hailing from Quebec, Céline Dion, initially, did very well with her French albums.  She first came onto my radar in the 1990s, after releasing her first English album, and she just seemed to be prolific with her powerful ballads ever since.

This tour is in celebration and promotion of her latest album, “Courage,” which debuted in mid-November of 2019.

The show started with a DJ playing fun hits to get the crowd amped up.  Dance participation was highly encouraged, with cameras highlighting crowd members up on a jumbo screen.

Then, the lights went dark, and the crowd went wild.  A video lit the screen, showing a montage of moments of Céline preparing for her show; one of the most striking images, for me, was a close-up of her eyes.

Then, the screen faded to black as a spotlight lit the center-stage, and the music diva rose up from a lift below stage while posing dramatically.  She began the show with “It’s All Coming Back to Me Now.” Dressed in a sparkly red dress with a slit up the thigh, she cut a striking figure…feminine, yet strong.  Once she finished, the applause and screaming were thunderous.

As a photographer, I had to miss a few moments, as I was required to put away my professional gear after finishing my photography obligations.  I got back into the arena just as the strains of “The Power of Love” were beginning.  MY PROM SONG!  I hurried to my seat to enjoy the rest of the performance.  My seat was in an AMAZING location; I felt like I was close enough to see the sparkles on Céline Dion’s eyes.

The show progressed with a pretty regular alternation of songs and video interludes…and costume changes (so many beautiful costumes)!

One of the video interludes that impressed me the most was one where Céline was doing a sort of ballet modern dance with a handsome man.  It depicted her as strong, yet with vulnerability.  It was very beautiful.

One of her costumes was a sort of tuxedo with huge ballooning sleeves. She eventually removed the sleeves to make herself comfortable but assured the audience (with a twinkle in her eyes) that those were all she was going to remove. She actually showed her humor quite a lot during the show, eliciting laughter from the audience.

At one point in the show, she covered “All by Myself,” originally performed by Eric Carmen, and made famous again when featured in Bridget Jones’ Diary years later.  That performance kind of got me—I felt myself welling with emotion.  I think I had also just kind of wondered about what she was thinking about while she was singing, since I could see some emotion showing in her own eyes.

Another favorite moment for me was her medley at the very end. She came onto the stage in this awesome, sparkly silver jumpsuit number, which went appropriately with the songs she covered by David Bowie, Queen/Freddie Mercury, Prince, Ike & Tina, and Patti LaBelle.

For her encore, Céline came out in this huge, fluffy, white corseted dress with TONS of tulle flouncing out at the neckline and skirt.  She looked beautiful and angelic.  Scenes of her filmed underwater played on the screen in the background as the first notes of “My Heart Will Go On” played.

Having looked up her tour, and other tour reviews, I was prepared with what I was about to see—but seeing it online is so much different than experiencing it in person.  There was no holding back as she sang and—as she did—a fleet of drones flew around her and lit up to look like fireflies or living stars.  The lit drones surrounded her and flew in cadence to the song.  It was mesmerizing and ethereal.

She ended the show with “Imagine.”  And before leaving the stage, she expressed how grateful she was to be able to do what she’s doing.

In the end, my impression of Céline Dion was that she is a smart, strong, beautiful singer that also has a wicked sense of humor.  I enjoyed myself immensely at this show!  It kind of made me wonder what her residency in Las Vegas had been like.

For those in the area that missed out on the Baltimore show, she is going to be performing on March 11th at the Capital One Arena in Washington, DC.  I highly recommend that you not miss her tour!

That’s the Way It Is

If You Asked Me To (Patti LaBelle cover)

To Love You More

All by Myself (Eric Carmen cover)

Because You Loved Me

My Heart Will Go On