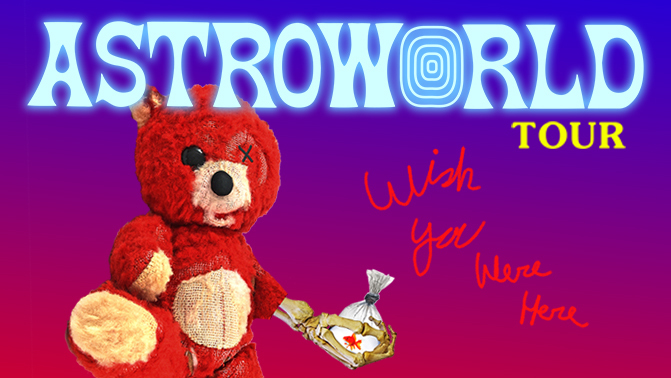 Its been a few months since we were graced by Travis Scott’s presence. Yet again Scott sells out the Capital One Arena by bringing Astroworld back for another night.

The arena floor, all the way to the nose bleeds were filled with fans. Two stages took up a majority of the floor; how Scott got from stage A to stage B you may ask? He had a singular roller coaster that went from one side to another; it even hovered over the crowd. The production from this tour was one of the best ones I’ve seen in a while. Even the B stage had its own circular roller coaster on it.

Scott had the fans off their feet from the moment he took the stage all the way until the last song. The set list was also packed full of older and newer hits of his. He started the night off with Stargazing, then went into Lose and Carousel then covered 2 Chainz’s 4 AM, that all took place on the B Stage. Scott then travelled in his coaster car to the A stage where it lit up from the massive LED board and the pyros that went off a majority of the set.

Scott had the fans going all night long during his thirty one song set list. Naming off a few he played included Antidote, 90210, Skeletons, Mamacita, Houstonfornication and Butterfly Effect. Scott is not only known for being Kylie Jenner’s love interest he’s also known for collaborating with so many talented artists. Throughout the night in the sold out Capital One Arena, he covered a various amount of songs such as Sza’s Love Galore, Future’s First Off and Kodak Black’s ZEZE.

This tour is insane, the music is phenomenal. The production is by far the best production I’ve seen in a while and who wouldn’t want to see a concert that has a roller coaster hanging from the ceiling. Travis Scotts Astroworld: Wish You Were Here Tour is a MUST see.  But if you miss this tour, Travis Scott will be headlining Firefly Music Festival in June! You just won’t be able to see insane production he has on this tour, but Travis Scott puts on one incredible show!