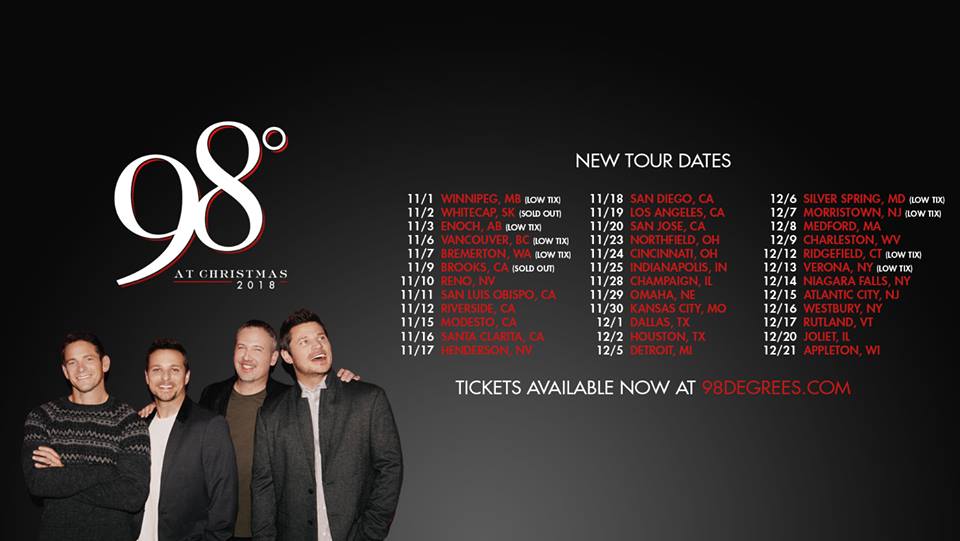 GO LIVE: 98 Degrees bring the Holiday Cheer to the DMV!

It’s the most wonderful time of the year! Not just because it’s the holidays and there are endless activities happening all around us, but because 98 Degrees sold out The Fillmore Silver Spring for their current holiday tour promoting their record Let It Snow.

As I entered the venue, there were countless smiles of fans already at their seats or at the bar grabbing a drink before the show. Fans really brought out their holiday attire, some wore Santa hats, some wore light bulb necklaces that flashed and some were in their most casual/dressy type outfit. 98 Degrees are back and better than ever, plus who doesn’t love a good holiday show performed by their favorite boy band from when they were a bit younger?

Eight o’clock sharp, the guys took the stage led by Justin Jeffre. Opening up with their original holiday hit, Season of Love. Instantly, the fans got loud once the guys started the show. Perfectly choreographed, the music sounding absolutely fantastic and the atmosphere surrounding you knew it was going to be such an amazing night.

The night has just begun and with 22 songs more to go the fans couldn’t get enough. A twenty two song set list was in store for the sold out show here in Silver Spring. A few songs played included some original Christmas tunes such as You’re a Mean One, Mr Grinch, Silent Night, Santa Claus is Coming to Town, Little Saint Nick and This Christmas. Not only did they include those holiday hits but they also covered a various amount of holiday hits sang by other big name artists such as Mariah Carey’s All I Want for Christmas is You, Brenda Lee’s Rockin’ Around the Christmas Tree, Chuck Berry’s Run Run Rudolph and Justin Bieber’s Mistletoe.

As the night grew to an end and so many classics were played the band ended their set withThis Gift. But who are we kidding, that isn’t the end, it just couldn’t be, the fans wanted more and they got just what they wanted. 98 Degrees came back out to perform a two song encore which included The Hardest Thing and Have Yourself a Merry Little Christmas.

The band is in the home stretch of their holiday tour, which ends on 12/21 in Appleton, WI. If you get a chance to catch them before this tour ends, I HIGHLY suggest it, not only do you get to see that boy band you grew up obsessing over, you also get in the holiday season by watching such an amazing production.